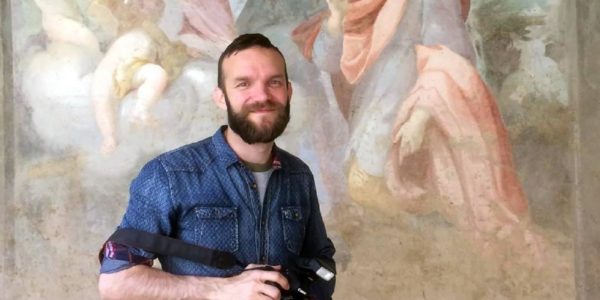 Passionate expeditions with the photo camera

Francesco Bini does not make a big fuss about his hobby, photography. But he could, because the 42-year-old hotel receptionist from Florence with over 280,000 self-made files uploaded to Wikimedia Commons Europe’s most important contributor to this database. Wikimedia CH has played a small but decisive role in this regard.

Whenever possible, Francesco roams through the streets and squares of his home town or his travel destinations, visiting churches, museums and other places where details are to be discovered, because art and architecture are his main focuses.

Editing Wikipedia articles was the impetus in 2006. “While writing, I noticed that pictures were missing for the texts”, reports Franceso, username Sailko. “Then I just took my little camera and went off.” The photo competition “Wiki loves Monuments” motivated him even more.

The first attempts quickly developed into a real passion. With experience his pictures gained in quality. And so it is not surprising that Ilario Valdelli, who is the Italian-speaking Community Manager at Wikimedia CH, became aware of him and recognized his potential. To support him in his immense voluntary work, Wikimedia CH sponsored a new camera equipment. “It is the main goal of Wikimedia to expand the volume of freely accessible knowledge. Pictures are also part of this”, says Ilario Valdelli.

“Uploading the pictures to Wikimedia Commons is a lot of fun. With practice came speed”, says Franceso with a modest smile. Otherwise he would probably not have been able to view, edit and upload about 200 pictures a day. “In these Covid times I naturally have a little more time to devote to my hobby,” he admits.

Ilario Valdelli is enthusiastic about the photographer’s commitment. “Francesco’s pictures of Renaissance buildings and works of art are a great help to the Wikipedia community in a wide variety of projects. Especially the detail shots of faces, hands, frames and other elements, make Wikipedia articles more elaborate”. Another important point for the users of the images: “Francesco also provides informative and relevant image descriptions,” the Community Manager points out. “Francesco has a very individual style. His pictures also reflect a part of his personality. This is highly appreciated by the users”.

The quality of his work and his reputation as a volunteer for Wikimedia Commons as well as Wikipedia open doors for Francesco that remain closed to normal guests. “It is a wonderful experience to be able to photograph works of art that usually are not allowed to be photographed. Even if he occasionally turns a blind eye to the prohibition of photography, he still observes the special rules for copy right in Italy.

The 42-year-old prefers natural light for his photographs. He almost never uses a tripod. “Retouching the pictures before uploading them takes up most of his time,” he says. His tip to all those who want to do the same: “Just go ahead and take pictures of what comes in front of your lens!” Because often it is the very banal things, small churches, places that are still missing in the database. By carefully observing the surroundings, a photo safari, which by the way is also fun with friends, turns a usual day into a journey of discovery .

World Champion from the Philippines

The world’s number one contributor to Wikimedia Commons is a user from the Philippines with about 600,000 images, says Francesco Bini. The two have not yet met.