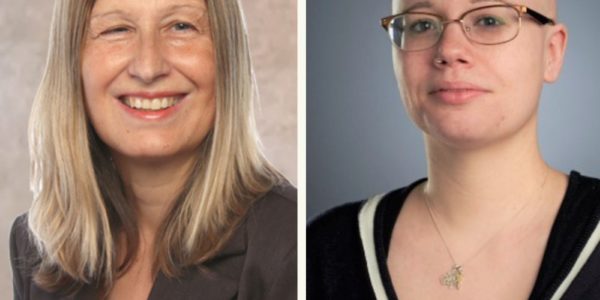 Wikimedia CH has two new staff members. Sandra Becker joined the team in July 2022 as GLAM lead. Lavinia Malo is in the capacity of Education Manager for Switzerland. She started on 1 August 2022.

Sandra grew up in Germany, Turkey, Peru and New York. She studied art and design in London and Berlin. Since 2012 already, she is an active Wikipedian. Before joining our team she worked as guestprofessor at Universities and in cultural institutions in Berlin and before Corona in South Brazil. As visual artist she likes to combine art, IT and education.

She used to work as Tech Coach for Bosch supporting startup teams; she is skilled in diversity topics as she has been an equal opportunity manager at the Steinbeis Faculty of Technology and Engineering and is one of the founders of the FemNetz in German Wikipedia. Sandra is a single mother with an adult child living in Germany.

Sandra recently moved to Switzerland after being part in the cultural scene in Berlin for 30 years. Among other things, she loves contributing to the cultural and scientific world of GLAM. For her, this means taking part in the greatest human project of free knowledge and digitalisation for a free world!

Sandra is native in German, speaks Spanish, French and English as well as Portuguese and Italian and has some knowledge of Turkish and Russian.

Lavinia studied Education Sciences in Fribourg and has seen several sides of the Swiss education system by contributing to academic researches around language acquisition and integration of technology in education, participating in education monitoring projects at the CDIP or by taking on teaching activities at a Sec II level. In addition to her main studies, Lavinia also studied Philosophy, Linguistics and Music, allowing for a holistic and inter-sectoral approach to tasks she undertakes.​

She lived in the UK for several years, working in international education environments. Believing innovation as being an inerrant part of education, she then worked for an innovation consultancy supporting tech start-ups with fundraising (public such as grants or private, e.g. equity) for their R&D, and helping shape their ideas into actionable projects.

“I’m excited to be able to contribute to Wikimedia CH’s impact on teaching and learning in Switzerland!”, she said.