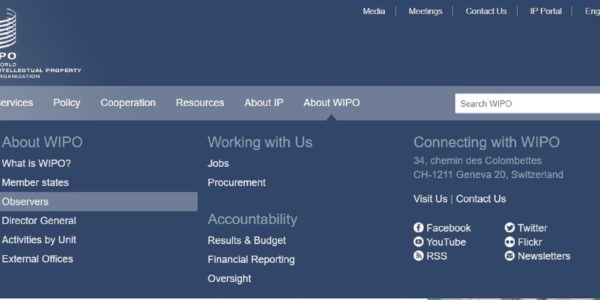 China blocked the Wikimedia Foundation’s bid for observer status at the World Intellectual Property Organization (WIPO) for the second time after the Foundation’s initial application in 2020. This happened during the 62nd Assemblies of the Member States in Geneva (October 4 to 8, 2021), the WIPO head quarter.

WIPO is the United Nations (UN) organization that develops international treaties on copyright, patents, trademarks and related issues. China was again the only country to object to the accreditation of the Wikimedia Foundation as an official observer.

The Foundation will reapply for official observer status in 2022, but it will only be admitted by WIPO if China decides to lift its blockade.

Jennifer Ebermann, Executive Director of Wikimedia CH:  „WIPO is an international copyright regulating organisation. As Wikimedia CH, together with our volunteers, we have been closely following its activities over the years. We work every day to bring copyright and other related topics closer to the people, volunteers on wiki projects and the general public alike. We are saddened that the Wikimedia Foundation cannot officially join the group of observers at WIPO”.

WIPO’s work, which shapes international rules that affect the sharing of free knowledge, impacts Wikipedia’s ability to provide hundreds of millions of people with information in their own languages. “The Wikimedia Foundation’s absence from these meetings deprives our communities of an opportunity to participate in this process,” says Amanda Keton, General Counsel of the Wikimedia Foundation.